Luck is something that losers depend on. Johnossi am Nova Rock - britishrock.cc

An Freunde weiterempfehlen
Nachricht an britishrock.cc
"Luck is something that losers depend on. Johnossi am Nova Rock - britishrock.cc"

Reviews
Interviews
Luck is something that losers depend on. Johnossi am Nova Rock
23.06.2007 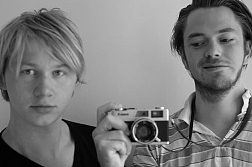 Britishrock: How are you doing with the heat here?

Ossi: Not too good, it is terrible. I am not complaining about the summer, but I am used to jump straight into the sea during the summer. Now we are at this place, which is like a dessert, and actually I am having a shower every half hour.

Britishrock: Do you have the same problem with the heat John?


John: Not as much as Ossi, but I think it is too hot. It is the pressure hotness I think.

Britishrock: I read that you got a record deal after 3 shows, how could that happen?


Ossi: Because I think we are that good!

Britishrock: But there are so many really good bands, and they don´t get a record deal. Did you have a little bit of luck too?

John: Half luck half…(Ossi interrupts him)

Ossi: Actually I don’t believe in luck. Luck is something that losers depend on, and it is not a good thing to rely on luck. But it was a combination of us being good, and the right people. But luck has nothing to do with success.

Britishrock: Aha, well…ok! How important is the relationship to your fans for you? You have this really cool diary on your Homepage, “Ossi speaks” and “John speaks”, how important is it for you, to communicate with your fans?

Ossi: It could be better, but we are really lazy. We enjoy the contact we have with our fans, but we are sometimes a bit too lazy. We have a lot of other stuff going on in your lives but…ähm…

John: Of course we want to find time to interact with our fans.

Ossi: We feel that we could be able to do it more, but we are just lazy. We will start changing that, because I and John were talking about that the other day. We were talking about MySpace (note: music platform with more then 100 million registered users) and just figured out that MySpace is dying, Myspace is out, it is shit…it is just shit!!!!


John: Too much Spam!

Ossi: MySpace had its time for like two years, but it is dying now. So we are going to concentrate on our own page, no more interacting with our fans through MySpace, because it sucks!

Britishrock: But you could have the connection to your fans through the stage, I have seen you live before…

Britishrock: Here today, outside…and you didn’t talk to your fans. You just said one extraneous thing and when you finished, you didn´t even say “Thank you” or “Goodbye”. That is kind of weird for me. Your Fans appreciate you, and you are not giving them anything back, you know?


John: But it is the first time you have seen us, right?

John: Well, we did a very short set, like an half hour and we wanted to push as much music into that as possible, but of course, that is no excuse. But I don’t feel like Jesus when I stand on stage, I don’t think “There you are my children, come to me”. It is not like that, because I am not that type of person. (Hesitates all the times and it seems that he has no idea what he is talking about)

You know me and Ossi, we write songs and we play music 80% just for ourselves.

Ossi: We play the music for the people and they can hear it. I am not the king and go on stage and say “Hello” to every fucker in the crowd. What we do instead is…

John: To every fucker? (laughs)

Ossi: Yeah, to every fucker!

John: To every fucker in the crowd (laughs)

Ossi: Yeah, …What we do instead is to sign things afterwards and meet the people face to face. Because when you are standing on stage, it is like 4 meter high and there is this fucking distance from the stage, so how can you ever get in contact with the people?

Ossi: Yeah, but I can play the music…(visibly enraged)

John: Yeah Yeah, but listen: The thing is, that we are only two people and we put a lot of energy and a lot of ourselves into our music when we play live. I have to concentrate on just being able to play, because I play and sing with the heart and therefore I concentrate on playing the songs.

Britishrock: Yeah, that is what I wanted to ask. Just two people doing the sound, isn’t that extremely exhausting?

John: Yeah, it is. And therefore I concentrate on trying to get into the music, you know? Just close my eyes and try to be inside of the music; just to do a show that is as good as possible. And I mean there are lots of bands who are like (and now he gets extremely loud and he works with huge gestic) ”Hello everybody, do you like being here…YEAAAAH”

Ossi: “I wanna hear you louder…YEAAAAAAH”

Ossi: No Louder…and louder and louder…

John: That is why Robbie Williams is huge. Robbie Williams has crappy songs, but he has charisma and he has an outgoing energy. It´s like (sings) “Do you wanna fuck my ass?”

Robbie Williams makes all the girls in the audience think, that they could actually fuck him. And I don’t want…

Ossi: We don´t want to give them the feeling, that they could fuck us…

John: (still with a loud voice) I don´t want to make people think that they could be a part of my life, because they can’t. We are just as normal as anybody else. I don´t have that “Here I am, you are my children”, and therefore I am not that outgoing.

Britishrock: Ok Ok, I got it! We should go on…

John: (can´t stop) We just want to play our songs and we are extremely happy if people enjoy our music and come to our shows.

Ossi: We communicate through our music.

Britishrock: Yeah ok, the only thing I said, is that I missed the “Thank you” at the end.

Ossi: I said Thank you, but I didn’t say it in the microphone.

John: But we usually always say “Thank you”, but I mean sometimes…

Britishrock: Yeah, but for me it was the first time that I have seen you live…

Ossi: Ok, if you missed it then: “Thank you for watching” (in a sarcastic tone)

Britishrock: OK, I will tell that your fans outside. Let’s go on: Would you compare yourself to other bands?

Britishrock: That is what you said!

John: That is what everybody says!

Britishrock: I am not saying it, but would you compare your music, your style to any bands?

John: No, because I mean to us, music is entirely freedom. If we wouldn’t do music, we would just be depressed. So we do it to feel good, that is the main reason.

Britishrock: How is the climate between all these Swedish bands?

John: The climate is good, because Sweden is a really small country.

Ossi: Everybody loves each other.

John: There are lots of bands, coming from Sweden. I think the climate is really good.

Britishrock: Can you name some bands you really like?

John: I like The Soundtrack of your Lives, The Hives…

John: Yeah Mando Diao. We know all these people, well we don’t really know The Hives.

Ossi: That is actually the reason why we like playing at festivals; you get to see your friends.

Britishrock: Is there a band today you are going to listen to? When are you leaving, today, tonight, tomorrow?

John: We are going to see The Hives and The Smashing Pumpkins.

Britishrock: Ok cool! Let’s get to your record: When you got your record done, were you totally satisfied with it? Or do you wish to change something afterwards?

Ossi: No, the thing is, you don´t want to change something on that record, you want to make another record that is even better. That is what we are doing.

John: What done is done. We don’t look back.

Britishrock: “Simplicity is the key” is written about your music. Is that also a slogan for your life?

John: No, definitely not!

Ossi: No, it is not simple. Our personal life is everything than simple. It is Chaos!

Britishrock: Is that because you are so busy with your music?

Ossi: You have your family and friends at home, who you love, and with whom you want to spend every second with, but this is impossible. And that is kind of hard for me. People, who have a normal job, like in an office, can at least spend some time with their families, but we are away all the time. At home we try to spend as much time as possible with our friends. It is getting really chaotic. That is not the way you want to live your life, but still, this is the way we have chosen to live our lives. We could end Johnossi whenever we want, but there are still a lot of people, depending on us and we are depending on ourselves. So it is pretty chaotic.

Britishrock: You seem to be really good friends, in your biography you write about “a love story between friends”. Is there anything that could tear you apart?

Ossi: I don´t think that is what friendship is about, having things that could tear you apart. It is better to have thing that bring you closer to each other. Talking about thing that could tear us apart is not interesting for us.

(they start singing “Love can tear us apart” from Joy Division)

Britishrock: If you could choose one written song from the past, which one would you like to have written yourself?

John: Oh a song, there are lots of songs. Actually I got the question 2 weeks ago in another interview and I said a song (note: one from Velvet Underground) I regretted afterwards.

One song that I really wish I had written is “Five Years” by David Bowie.

(starts singing really really good) That is one of my favourite songs.

Britishrock: Nice! If you wouldn’t be musicians, what would be your profession?

Ossi: I have no idea!

John: Nothing, we would be losers.

Britishrock: Losers wow. So you have no other talents?

Ossi: Of course, if my arms would get hurt and I couldn’t play the drums anymore, I would have to find something else to do.

John: I would rob a bank I think. Just to get some money and leave Sweden.

John: Ahm, if I was alone, all by myself, if I wouldn´t have Johnossi, all I would think of is to get some money and move to a cheap country.

John: I guess Asia is very cheap, oh well Japan is extremely expensive. But maybe the Philippines’…but it is really hot there, isn´t it? Oh no, it is too hot. And it is rainy.

Ossi: I would say, as long as it is close to the ocean it is fine!

John: It is really simple. If you feel that you don´t want be an astronaut anymore, then you can just open the door, and you go up and get the experience that nobody else gets, because you get to be in space and…

John: Yeah, die in space. But you would have this amazing experience.

But on the other hand, it would be really scary to fly around in space.

Ossi: Yeah, that would be cool.

Britishrock: Ok, thank you guys for this interview.

I never had Sex with a groupie. Mando ...
Zum Interview am Nova Rock

Come to me, you are my children - Johnossi
3 von 4
Auf Facebook teilen