“I never had Sex with a groupie”. Mando Diao im Interview - britishrock.cc

An Freunde weiterempfehlen
Nachricht an britishrock.cc
"“I never had Sex with a groupie”. Mando Diao im Interview - britishrock.cc"

Reviews
Interviews
“I never had Sex with a groupie”. Mando Diao im Interview
22.06.2007 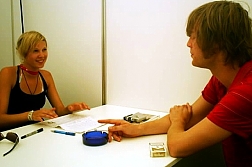 Britishrock: How do you manage life with this huge success? Are you already drained?

Britishrock: So everything is alright?

Björn: Yeah, everything is fine.

Britishrock: Good to hear that! How ridiculous is it already that so many bands claim to be “the best band in the world”?

Björn: I don´t know. If you are in a band I guess, that is what you think. Otherwise you would probably be in another band. I would be in another band, if I wouldn’t think that we are the best band. You are always looking for perfection when you make music.

Britishrock: What do you think about bands like the Rolling Stones, who are still performing in their old ages, still doing the same music; Do you think they already passed over the border of embarrassment?

Björn: I mean, it is not embarrassing being on stage, but it is embarrassing playing the songs like they played it in the 60s. If they would have written songs that suite their age, it would be fine. Neil Young does that very well, he is writing songs about his age.

Britishrock: Can you imagine being on stage when you are 60, still doing the same music?

Björn: No No, not the same music but I guess I will be on stage forever.

Britishrock: Yeah? So you come on stage with the wheelchair?

Björn: I will come with the wheelchair and play some country songs.

Britishrock: Country music? Do you think, that that will be the new Retro?

Björn: It could be!

Britishrock: Have you ever heard in an Interview, that you sound like Sugarplum Fairy?

Björn (smiles): No, I have never heard that.

Britishrock Thomas: I guess the other way around.

Björn: Yeah, but I don’t think that it is true though. They are much more “popier”.

Britishrock: That is true! Do you have any guilty pleasures, music you listen to, when you are on your own?

Björn: Guilty pleasures? Ahm, I like smoking and drinking…

Britishrock: Yeah sure, but I mean music; Do you listen to Country Music?

Björn: I listen to Country music a lot, Hank Williams and Johnny Cash and some Kenny Rodgers sometimes. Then I also like Jazz Music, John Coltrane and Miles Davis and all that. That is very nice.

Britishrock: What was the most ridiculous rumour you have every heard about your band or about you?

Björn: That we once said that we are better than the Beatles, The Rolling Stones and The Kinks.

Britishrock: So you never said that?

Björn: I think this is wrong, I don´t know who that said. We always hear it.

Britishrock: It is also a quote in this Newspaper (note: Kronen Zeitung)

“Björn Dixgard said: “We are better than the Who…”

Björn: That is wrong, it could have been one of the other guys, but to me, it is very wrong. We would never say that, well maybe we said it 7 years ago…


Britishrock: Anyway; you meet a lot of musicians. Is there anyone you met, about whom you could say that this is/was one of your idols when you were young?

Björn: No, not so far. We haven’t met the big ones yet. I met Neil Young’s son once, but not him.

Britishrock: And who would it be…

Björn: It would be Neil Young, Bob Dylan, and Paul McCartney, some of these guys
We met a lot of musicians, but they are the same majors as us, but they are not our idols.

Britishrock: If you would do a secret tour, what name would you choose for your band?

Britishrock: Really? Will that happen?

Björn: Yeah, that is something that could happen.

Britishrock: Cool, and what music would you like to play then?

Britishrock: So when can we expect that?

Björn: I think you can expect it, but I don’t know when. As soon as we have some time of, I probably plan something like that.

Britishrock: Wow, that’s cool. I am very looking forward to this. So tell me, what is the most overrated band in our times?

Björn: It is not my thing. I don’t know, maybe it is too epic for me.

Britishrock: Are you going to see them tonight?

Britishrock: So, any other overrated band?

Björn: Hm, I think the people like what people like. It is hard to say anything against that.

Britishrock: Yeah, but for you; a band who has a really huge hype at the moment?

Björn: I think the Arctic Monkeys got some songs, but they are not as good as people say. They got 3 or 4 good songs but to me, you got to have 3 or 4 good records to be a huge band.

Britishrock: What to you think about bands, who invest more time in their hairstyling than into their music?

Björn: It is not a real band then. That is fashion!

Britishrock: Yeah, but they are famous too…

Britishrock: There are a couple of bands but Panic! at the Disco is my favourite example.

Björn: Oh yeah, yeah! Well we have never been into that so much. The only thing we do is to let our hair grow, that is the only thing.

Britishrock: And you are wearing leatherjackets when it is totally hot outside…

Björn: No, I haven’t worn a leatherjacket in almost one year now.

Björn: Seriously, we are out of leatherjackets.

Britishrock: So what is coming now?

Björn: I don´t know, T-Shirts? Or no clothes at all maybe?

Britishrock: Ooookay! In what movie would you like to be part of the soundtrack?

Björn: (without hesitation) The Godfather. If I would have made some music for that, that would be perfect!

Britishrock: Do you already have written songs that could be used for The Godfather?

Björn: Yeah, but no Mando Diao songs. Just some of my private ones, I have a lot of instrumental songs that we never release. That ones could really be in a movie.

Britishrock: You should do that, releasing an album just with those songs.

Björn: Yeah, I guess sometime we will make some film music.

Britishrock: “Ochrasy” is a word you created; what does Ochrasy mean to you?

Björn: The Ochrasy is the whole life around us, all our touring, the life we are living in, the people we meet. We live a strange life, because we are playing very late, at 12 or 1 am. And then we go off stage, doing party till 3 in the morning. We attend to meet all the weird people, because the normal people are at home sleeping. That is, what Ochrasy is.

Britishrock: Oh yeah, I read that already in an Interview. But you are going out after a concert? I would be totally exhausted, just falling in my bed after such a concert…

Björn: You get new energy one hour after the show. (Björn sneezes and apologises. He is allergic against Pollen)

Britishrock: How is the climate between all these Swedish bands? Because we were interviewing Johnossi yesterday…

Britishrock: Well yeah, I have another opinion but anyway. So how is it with the other bands?

Björn: Well some bands are friends, some are not. We are not friends with anybody though, except Soundtrack of our Lives and Johnossi. You know, we are on tour all the time and we almost have no time to meet our family.

Britishrock: Do you still live in Sweden?

Britishrock: So what does Sweden mean to you?

Björn: It is my home country; it is the country I like to spend time in.

Britishrock: Is that also something that influences your music?

Björn: Yeah, not in the past but now we start to get into old Swedish folk music and that is very interesting. That is an advantage we have, it would be cool to use it in some way and mix it in.

Britishrock: How are the reactions to your music in the U.S.?

Björn: Very good, this tour we just did was the best one so far. A lot of people came to our shows.

Britishrock: Did they already know you?

Björn: Some people yes, but most of them were checking us out, I guess.

Britishrock Thomas: I saw you in the Brixton Academy and I think you were a way better than The Dirty Pretty Things. You were really playing your ass of …

Britishrock Thomas: The audience was really ignorant though; in London they are often like that. When there plays a band from London, they are very supportive and when there is somebody from outside London, they ignore them and let you know that they are ignoring you. Is breaking the UK something important for you?

Björn: 3 years ago it was important to us, but now we realize that is not so important. America is much more important. You get so much out of being in Germany, and we are so big in every Country except England.

Britishrock: So what is the problem?

Björn: I think people don’t like us, they got this strong own culture and they don’t want to bring in a Swedish band, I guess. But that doesn’t matter!

Britishrock: By the way, how did you enjoy Amsterdam?

Britishrock: Is that a real experience you had. “And the dealer boys they had to bring me water?” (songline from Amsterdam/Ode to Ochrasy)

Björn: Yeah, they had to. It is pretty rough there, but fun as well. It is like being in a big candy store when you were a kid. You can do pretty much everything you like to.

Britishrock: That is true, but they have really weird things too though. They are a bit too open-minded.

Björn: Yeah, I know what you mean.

Britishrock: I thought one quote of you was really fun. You said, that you are not like Axl Rose, who is after all these 18 year old girls.

Björn: (laughs) That is true…We are very stylish, and we are picky, we don’t take anybody!

Björn: We are not a typical groupie band.

Britishrock: Well I would say you are typical groupie band but…

Björn: …we don’t take advantage of it. I never had sex with a groupie.

Björn: That is true!

Britishrock: Although you could have almost every girl outside there…?!

Björn: Yeah, but you know I am 26 and the girls that are standing in the front row are like 18?!

Britishrock: Do you sometimes wish that the audience would be a bit older?

Björn: No No, the younger the better. The people are jumping up and down, we enjoy that!

Someone from Mando Diao´s record label comes in, the second time, and wants to stop us but Björn is just asking him for a lighter to smoke his next cigarette. So the talk goes on, about tour busses, aftershowparties and some more things. I am not recording anymore ;-)

“Luck is something that losers depend on...
Zum Interview am Nova Rock