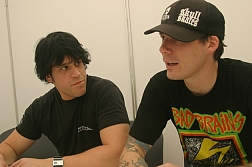 What do you think about your performance this afternoon?

Jon: It was awesome! We were a little bit surprised because we played in Austria only once so far.

Aaron: We loved how the crowd reacted. It was just a great feeling!

Is it a bit strange to perform songs from the new record which isn’t released yet?

Jon: Well, the new stuff is going pretty good and I think that the crowd realizes that we’re quite enthusiastic about playing songs from our new album.

Aaron: Some new ones like “Devil in a midnight mass” and “Red flag” are already online. So, those are the ones people recognize.

I listened to “Billy Talent II” already. Well, in fact a hundred times maybe, and I have to say that it’s just tremendous.

I’d say that it is even better than your debut. Do you feel about it the same way?

Jon: Absolutely! It’s the best we’ve ever done! We created it exactly the way we wanted it and we’re very proud of it.

What were the main differences in the recording process this time?

Aaron: The biggest difference was that Ian co-produced, so there was never any question of the way we wanted things to be because he was leading the charge. This time we were much more confident as musicians and as a band, we were less nervous too.

When I think of your show today it is hard to imagine but did it ever happen that an audience isn’t that outgoing?

Aaron: Yeah! We supported The Buzzcocks in 2003. That was our first time touring through the United States. No one really understood our music, obviously everybody came to see The Buzzcocks. In Canada and Europe it always was different. This is such a great feeling when you work so hard for such a long time.

Are there main differences concerning the reaction of the fans in Europe?

Aaron: Everywhere we go in Europe seems amazing for us, we don’t know why. In Canada the reactions are enormous too. We still have work to do in the UK and in the USA.

Do you prefer huge stages like here at the Nova Rock or smaller venues, for example club gigs?

Aaron: Well, it’s so exciting to play at festivals, especially in the night time. When you do the whole summer nothing else you really look forward to get into the clubs.

Jon: It always depends on how the crowd is like. Festivals are cool because you get to see other bands too. We also did several in the United States too which are definitely not as good as those in Europe. You can’t even compare them!

Are you interested in other bands at the Nova Rock?

Aaron: Yeah, I’d like to see Sisters Of Mercy but we’ll be gone when they perform.

Jon: I hope to see Gogol Bordello. Recently we played with Tool, Korn, Metallic and Deftones.

Your lyrics seem to be quite aggressive and negative. Why’s that?

Aaron: There’s always an element of hope. I think that people realize that. Basically we are telling stories – breaking up with a girl or building a bomb to blow something up. We like to write songs that mean something.

Would you say that you’re a political band? I think of “The Navy song”…

Jon: I’d rather say that there’s a political agenda behind “Worker bees”. “The Navy song” is based on something in World War Two that Ben wrote about. We don’t really consider ourselves as a political band. We’re more of a socially aware band, we know what’s going on in our environment.

Canada is often described as very “European”. What do you think about that?

Aaron: It’s a good mixture of American and European influences. Our country is mostly build by European immigrants, so there are a lot of traditions that come along with that. In Toronto you got Little Italy, Little Poland, Little Portugal and so on. We’re very lucky to be so multicultural and to get exposed to so many wonderful different cultures.

Jon: And the food is so good!

Aaron: Yeah, we got anything we want, from every country!

What does that mean to you?

Jon: Well, I play hockey all my life and I’m the biggest fan in the world. You just grow up with that, it’s a cultural kind of thing. But there are also people that don’t like hockey it’s fans. I would say it’s fifty-fifty. But especially in Toronto it is very important.

Would you play a concert when the Leafs are in the Play-Offs at the very same time?

Jon: Well, unfortunately they didn’t make it in the Play-Offs this year…

Jon: Me personally, I’d prefer to watch the game. Hockey is pretty alright in Austria, isn’t it?

Yeah, but we are a small country, you know? We have a bunch of excellent players but we have to struggle each time to remain in the World’s Group A of nations. Our hockey figurehead is Tom Vanek, without a doubt.