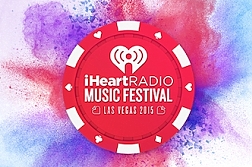 The iHeartRadio Music Festival is returning to Las Vegas on September 18th and 19th for it's fifth year to once again make music history, and the star-studded lineup has been revealed! And based on this roster of stars, you will NOT want to miss out on this epic weekend.

An Freunde weiterempfehlen
Nachricht an britishrock.cc
"IHEART RADIO '15: Las Vegas festival with Coldplay, The Killers, The Who, Kanye West... - britishrock.cc"