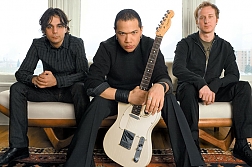 What kind of Rockfestival would we be if we didn’t have the founding fathers of the most successful metal band of our country? When a little mail order called Nuclear Blast started a contract with their first band they didn’t know how Markus Staiger would create the most important metal label of the modern era.

One of the biggest selling rock bands from Vienna during the 80s and the 90s was Pungent Stench. Well, you will be happy to know that Martin Schirenc (Pungent Stench), Danny Vacuum and Mike G. Mayhem (Hollenthon) are bringing Pungent Stench classics back to life and live. The club Mondo Bizarre – for members only – is now open.

And DANKO JONES is also going to rock the stage! Danko Jones is proofing that maple syrup is not the only export hit of Canada, but he is too. Get excited for Danko Jones’ newest track “Fire Music” that they are going to play exactly where they are supposed to play it: on Friday at the biggest rock stage of the country at the Viennese Danube Island! You’ll get topnotch Rock’n’roll from the best livebands from North America, directly from our stage into your ears.

By the way, there is something we can tell you for sure: each Headliner is going to play for at least 90 minutes on stage – but guess what, it’s possible they are going to rock out for 2 hours or even more!!!

This is how the planned program looks like in detail: