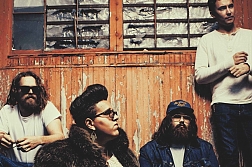 Celebrating its 10th anniversary, The Great Escape (TGE) festival has announced the first 150 acts of its line up. Topping the bill in Brighton, UK, will be southern soul-rock quartet Alabama Shakes, which will play one of the festival’s main Brighton Dome slots.

Other notable acts playing across 30+ venues in Brighton include experimental folk singer Soak, reflective LA-dwelling songwriter Tobias Jesso Jr., alt-punk BBC Sound of 2015 nominees Slaves, disarmingly emotive hip hop artist Loyle Carner and lovelorn electronic soul artist Dan Bodan. A plethora of genres and musical styles will be on show at the festival, which runs from 14-16 May this year. And 2015 sees festival organisers turn their attention back to the UK music scene, having previously partnered with countries across the globe to provide a platform for the freshest foreign talent. “As we celebrate the festival’s 10th anniversary, we feel it’s the perfect time to focus on the huge amount of brilliant, home-grown talent here in the UK,” said Festival Director Kat Morris.