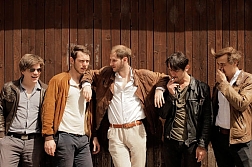 Witty lyrics and great melodies – sometimes creating great songs seems so simple. A new Vienna-based band are rocking the charts as their debut album convinces critics and fans in Austria and abroad.

Wanda are already praised as one of the best contemporary bands from Austria. “Amore”, which was released recently – contains 12 fantastic songs full of clever lyrics packed with hints on the infamous nightlife of Vienna and on personal tragedies between romance and separation. However, the five-member band fronted by singer Marco Michael Wanda also earned praise by critics in Austria and Germany – Spiegel Online awarded “Amore” nine out of ten points – thanks to their charming and catchy melodies. Referring to Wanda, Berlin newspaper Tageszeitung wandabranded 2014 as a “great year for music from Austria”.

Dance music aspects merge with traditional rock elements and smooth Austropop reminiscences. The result is a bunch of playful songs that function as soundtrack for motorway rides as well as for parties. Even some mainstream radio stations have started discovering songs like “Auseinandergehen ist schwer” and “Bologna” – despite controversial lyrics about sleeping with a relative.

While “Amore” secured its place on several album of the year rankings, 2015 seems destined to become the year of acclaimed live performances across Central Europe. The band – who sing about living in Rome and dying in Vienna (“unfortunately”) – are at the ready to perform in Munich (31 January), Nuremberg (4 February) and Hamburg (8 February).