SZIGET 2015: The Machine is rolling! - britishrock.cc 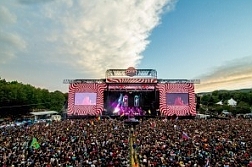 Sziget Festival will once again have more than 50 program venues and now the organizers have started to reveal the music line-up. The Island of Freedom is always the right place for colorful programs and also 2015 will see an event presenting as many genres and artforms as possible. For 2015 Florence and the Machine, Alt-J, Jamie Woon, Blasterjaxx and many more are already confirmed. Early bird passes are available until 31st December.

The organizers of Sziget Festival have announced the first confirmed acts. The 2015 event will take place between 10-17 August in Budapest, providing a 7 days festival-holiday experience at the heart of a great city. And Sziget promises to be as colorful, exciting and spectacular as ever. To feel the vibe here is the 2014 aftermovie: http://youtu.be/k_JqgPOJBpA with over 100,000 views already!

Sziget hosts more than 50 venues, so the list of programs is almost eternal and takes a long time to get its final shape. The organizing crew already confirmed that Florence and the Machine will play on Day 0, 11 August, so those who want to enjoy the show of the well-known indie rock band of Florence Welch should make sure they buy 7 Days Passes.

Sziget is also proud to announce Alt-J as part of the line-up. With their debut album, 'An Awesome Wave', released in 2012, they reached a huge success, followed by this year's 'This is All Yours'. Their gig will definitely be a must-see for Szitizens.

EDM fans can enjoy the music of Thom Jongkind and Idir Makhlaf, better known as producer/deejay duo Blasterjaxx. Many successes and milestones followed their career so far which resulted in the fact that they are now seen as one of the most promising EDM artists in the world.

British singer-songwriter Jamie Woon will also hit the Sziget stage. His characteristic voice is combined with an exciting merge of cold electronic tunes and soul.

Budapest will be happy to welcome Fauve, an interesting French combination of music and videography. The second part of their debut album, Vieux Fréres - Partie 1, is expected by the end of the year or early 2015.

It has been some time that we haven’t heard about José Gonzalez, but he is now confirmed for Sziget and will also release his first solo album in seven years. 'Vestiges & Claws' will come out in mid-February and, as José sees it, the record is his personal, “zoomed-out eye on humanity on a small, pale blue dot in a cold, sparse and unfriendly space."

The Subways will definitely bring the party mood to Szitizens. They are currently working on their fourth album, so next to Rock&Roll Queen, the audience will have the opportunity to enjoy some fresh indie hits.

Babylon Circus, the French 10 member ska-reggae group, will also make the Sziget audience dance and jump around already on Day 0, 11 August. Full of life and joy, this energetic French group will definitely be a colorful part of the 2015 Sziget experience.

New colonists of the pop empire, Kadebostany have swiftly catapulted themselves into the spotlight with their irresistible blend of pop music devouring unlikely influences to create a singular yet terribly catchy universe of its own. Come to Sziget and check it for yourself.

Led by Aaron Bruno, AWOLNATION crafted one of the most influential songs in years with the chart-topping track “Sail.” The song has also achieved global success and they are coming to Sziget with their album 'Megalithic Symphony'.

So, you have the first taste of programs, but Sziget is so much more than just music. It’s also a place to live your own dreams, so we urge all Szitizens to take part in the Christmas game that already made some great wishes come true in the last few years. An official marriage, a marriage proposal on Main Stage (with a positive answer☺) and the beautiful love story of a girl from Zimbabwe and a Dutch boy all happened on the Island of Freedom as part of this game, just to give a few examples. The big dreams can be submitted here: http://xmas.szigetfestival.com/