AC/DC concert may be a slippy affair - britishrock.cc 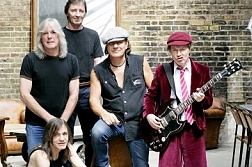 The Highway to Hell could turn out to be a bit wet as weathermen forecast rain for Sunday night when Australian rock legends AC/DC take to the stage in Vienna.

Christian Csekits of the Central Agency for Meteorology and Geodynamics (ZAMG) said today (Thurs): "Fans should consider bringing a raincoat. We see a 60 per cent chance for rain on Sunday night."

According to news website Austrian Times, Csekits said sun and temperatures around 25 degrees centigrade will dominate Sunday during the day but clouds were expected for the late evening.

All of the 50,000 tickets for the gig at the Ernst Happel Stadium sold within minutes last December.

AC/DC are currently touring in support of their new record "Rock’n’Roll Train."