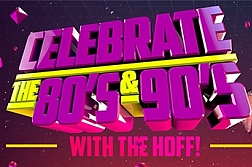 Celebrate the 80s and 90s with The Hoff is a concept developed by David Hasselhoff and the 2 event creators Chris Collings and Thomas Borgvang. The 3 hour show features some of the biggest artists from the 80s and 90s, staged with custom made retro videos and spectacular pyro and laser effects. The show is hosted by David Hasselhoff, and will travel the world from spring 2014.

An Freunde weiterempfehlen
Nachricht an britishrock.cc
"Celebrate The 80s & 90s with THE HOFF & Acceleration 14! - britishrock.cc"