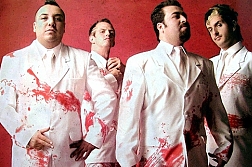 Mexican flags and football jerseys were not an uncommon sight at the Szene club in Vienna on Monday night when crossover rock stars Molotov rocked the house.

The four-member band from Mexico City performed both new songs and their biggest hits like “Voto latino” and “Gimme tha power” – to the delight of the enthusiastic crowd at the sold-out venue.

Modula Nation and Loxodrome took advantage of their assignments as support acts. Both bands have surely won many new fans that night. Molotov are currently on their “Don’t you know we are loco” world tour which will take them to Feldkirch in Vorarlberg, Austria, Zurich in Switzerland and Frankfurt, Germany, in the coming days.

Metal legends Sepultura will perform at the Szene (www.szenewien.com) in Vienna later this month (25 July). German rock act Emil Bulls hit the stage at the same venue on 8 November.