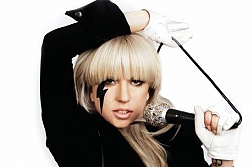 Lady Gaga is recording new songs in Austria, it has been revealed. Bosses of Viennese recording studio MG Sound confirmed reports that the pop star has booked into their venues for two days.

The award-winning singer, who will perform at the city’s Stadthalle tomorrow night, is understood to be trying to save time and record new material for her upcoming album "Born This Way" while on the road. U2 singer Bono previously recorded vocal lines at the MG Sound studio which is located in the capital's city centre.

Lady Gaga rocked at the sold-out Gasometer concert hall in Vienna last year. The singer has a huge following in Austria, but a poll by researchers Market also showed that only eight per cent of men in the country named the pop diva as their personal sex symbol. Angelina Jolie topped the ranking. The Hollywood actress is adored by 47 per cent of Austrian men.