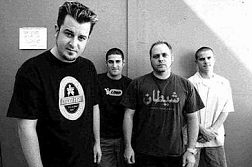 Californian melodic punk stars No Use For A Name and Lagwagon will perform on one night at Vienna’s Arena next month. The associated bands were to rock the abattoir-turned-concert venue on 26 July.

Both bands won many fans across the world through extensive touring. While none of their albums achieved top chart positions, No Use For A Name and Lagwagon are regarded as two of the best in the genre.

No Use For A Name front man Tony Sly and Lagwagon singer Joey Cape teamed up in 2004 for the acclaimed album "Acoustic", a collection of unplugged versions of popular songs by both bands.

It emerged earlier this week that American synth-pop / rock three-piece Trans Am will perform at the Fluc Vienna on 5 August, while rock legends Guns N' Roses return to the city for a show at the Stadthalle on 18 September.

Pop icon Prince will perform in Linz on 13 July, while legendary singer-songwriter Bob Dylan is set to hit the stage in Linz on 12 June before rocking Dornbirn seven days later.

No Use For A Name
Zur Künstlerseite mit Infos und Tourdaten