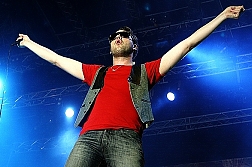 British indie rock giants Kasabian will return to Austria this summer, it has been revealed. The Leicester-based band is set to perform open air at Vienna’s Arena on 8 August. Tickets for the gig are not yet on sale.

This announcement comes just one day after it emerged that Bob Dylan will perform in Dornbirn, Vorarlberg, on 19 June.

A news update on his official homepage, www.bobdylan.com, revealed the concert date after it was confirmed earlier this month that the legendary singer-songwriter will perform in Linz, Upper Austria, on 12 June.