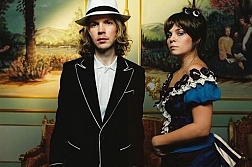 Beck's impressive career is the end result of an uncompromising playfulness when it comes to music genre limits and an unmistakably unique sound as the end result. His brilliant and idiosyncratic body of work has earned Beck with the title of probably the most creative and most original alternative rock authors over the past decades. Leaning into the full spectrum of contemporary music, from folk, psychedelia, hip-hop, electronica, soul, funk, pop and alternative rock, Beck's sound is a hybrid unique only to him. Over 50 nominations for global awards in the fields of music, design and audiovisual arts, twenty award titles, including seven Grammys and three Brit Awards, establish the mainstream perception of Beck as multifaceted artists whose relentless creative energy pushes the expectations and boundaries with each new studio release. Thirteen gold, platinum and multi-platinum studio records, sold-out world tours, an array of music collaborations with artists from a variety of contemporary music genres, and unique multidisciplinary art projects behind Beck are the best interlude to the latest 14th studio album Hyperspace, released in late November of 2019, and featuring yet a new Beck perspective for the 21st century.