Johnny Marr is the latest addition to the impressive INmusic festival #14 lineup! - britishrock.cc 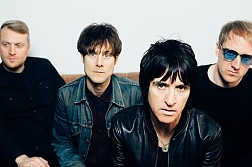 One of the world's best guitarists and a former member of legendary bands The Smiths, Electronic, The The and Modest Mouse, Johnny Marr, is set to headline INmusic Festival #14’s OTP World stage this summer!

During his dazzling career, Johnny Marr collaborated with some of the world's greatest music names such as Oasis and Bryan Ferry, and his powerful guitar riffs helped establish The Smiths as one of the most acclaimed and pioneering bands of the 1980’s. Marr played in several bands before forming the legendary The Smiths with Morrissey in 1982. In the years that followed, they became one of the most important British bands of all time, but Marr left the group in 1987. He continued working with numerous colleagues, including the Talking Heads, and a couple of years later with Bernard Sumner (New Order) and Neil Tennant (Pet Shop Boys) he founded an alternative supergroup Electronic. For several years he was under the radar, but he released the album Boomslang in 2003 with The Healers, where he sang for the first time and collaborated with numerous bands like The The. Marr was a guest on Modest Mouse's album in 2007, and he was later on tour with them as a member. After the project with Modest Mouse he also performed with The Cribs, and finally decided to pursue a solo career and released the album The Messenger in 2013. Playland came a year later, and Call the Comet was released last year. Johnny Marr will perfrom with his band at INmusic festival #14 headlining the OTP World stage, where he will present a cross-section of hits from his rich career, as well as new songs.

Johnny Marr is joining the stellar line-up including the legendary The Cure, Foals, Suede, Garbage, LP, The Hives, Kurt Vile & The Violators, Frank Turner & The Sleeping Souls, Santigold, Sofi Tukker, Peter Bjorn and John, Skindred, Zeal & Ardor, Fontaines D.C., Black Honey at INmusic festival #14, along with many more yet to be announced. INmusic festival #14 will take place at the Isle of Youth at Zagreb's lake Jarun from June 24th to the 26th, 2019. Three day festival tickets for just 67 EUR (+transaction costs) are available until Friday, March 29th at midnight via the official festival webshop, while seven day camping tickets for just 33 EUR (+transaction costs) are also available online via the official festival webshop.

An Freunde weiterempfehlen
Nachricht an britishrock.cc
"Johnny Marr is the latest addition to the impressive INmusic festival #14 lineup! - britishrock.cc"