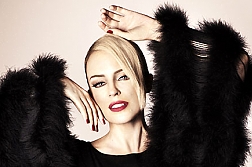 After the incredible reception of her intimate shows earlier in the year, Kylie Minogue today announces her ‘Kylie presents Golden’ European tour, which will see the international pop star play to more fans across Europe this November.

Kylie, whose performances have been globally-celebrated over the years, will play shows that embrace themes of ‘Golden’ – Kylie’s most personal album to date. Fans will see Kylie and her live band perform songs from her new number 1 album, together with iconic classics from her phenomenal back catalogue.

‘Golden’ was released earlier this year via BMG - her first album on the label. It debuted at Number 1 in the UK Albums Chart and is her sixth Number 1 album to date. It spawned the singles ‘Stop Me From Falling’ and ‘Dancing’, the official video for which has over 9 million views and counting.

Kylie says ‘Performing the intimate shows earlier this year was so rewarding and so much fun. I can’t wait to bring this special show to more cities across Europe. See you there!’