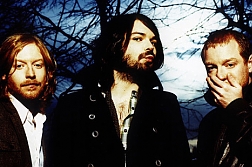 Recorded at London’s famous Roundhouse venue on November 8th last year, the recording is rich with favourites from the band’s back catalogue, as well as a stunning take on the Beach Boys’ classic ‘God Only Knows’ and brand new track ‘Different Kind of Love’.

MTV will broadcast a global premiere of the Roundhouse performance on May 25th. Biffy Clyro ‘MTV Unplugged’ will premiere in the UK on Friday May 25th at 9pm on MTV and at 10pm on MTV Music.


‘MTV Unplugged: Live At Roundhouse London’ will be released on digital, CD, CD/DVD and a special vinyl/CD/DVD boxset. Pre-orders are now available via the official store, with the new Unplugged version of ‘Many of Horror’ provided as an instant download.

Everyone who pre-orders the album from the official store will subsequently receive a pre-sale code for the band’s MTV Unplugged tour which begins in September. Please note your album pre-order does not guarantee tickets. Pre-ordering provides first access to pre-sale tickets and will be available on a first come, first served basis.

The MTV Unplugged tour presents a chance for a wider audience to see Biffy Clyro play a rare full-length acoustic set in magnificent surroundings. The dates are: