“There is no such thing as the Austrian soul”. Hans Theessink Interview - britishrock.cc

An Freunde weiterempfehlen
Nachricht an britishrock.cc
"“There is no such thing as the Austrian soul”. Hans Theessink Interview - britishrock.cc"

Reviews
Interviews
“There is no such thing as the Austrian soul”. Hans Theessink Interview
20.08.2008 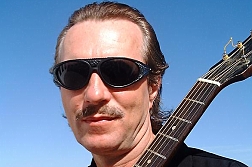 Hans Theessink says he never feels like a tourist when he sometimes returns to his native Netherlands as he is truly a “citizen of the world”. At last Sunday’s Lovely Days festival in the Burgenland town of Wiesen, Britishrock.cc spoke to the Blues guitarist who has recorded an impressive number of 22 albums to date.

Theessink opened the event at 3pm arriving on stage with his five-piece band minus a drummer - and immediately got the crowd involved by rousing them to sing along to several of his songs.

”I prefer to go out there and play first. As the opening act you know where you stand,” says Theessink.

But it is not only his timeless music that captivates his audience. But also the sarcastic, warm-hearted banter in between songs that entertains young and old alike, as his performance at Wiesen showed.

Such as the story he relates about Bob Marley's stoned keyboard player who had to be led onto the stage. “We got stoned as well,” he shouts to the crowd. “But only because we had the neighbouring dressing room backstage.” How the audience loved that!

”I have nothing against any ‘influences’ as long as it does not harm people,” he tells Britishrock.cc, referring of course to his partaking of certain substances. “It’s all fine to a certain extent, isn’t it? And if it means a boost to creativity, why not? But it can of course become destructive so quickly.”

While most of his work is slow Blues rock, the 60-year-old is always prepared to experiment with his music, becoming increasingly influenced by African culture and music over the past few years.

‘Visions’, his newly-released album, sees him collaborating with virtuoso US vocalist Terry Evans. But one collaborations clearly sticks out in his mind.
His eyes light up when he says: “Getting to know [US rock’n’roll pioneer] Bo Diddley was amazing, working with him was incredible. It was such an honour as he was, and still is, such an influential person.”

Theessink admits to being unable to pinpoint one exceptional experience in his rich career gets emotional when he talks of spontaneity.

”It often happens that after a gig, especially in the US, that me and my band sit together with other musicians late into the night to jam. It is an unbelievable feeling when a melody evolves and we realise being on the same wavelength. Sometimes, tears run down my face on those nights.”

Living in Vienna for many years now, Theessink also has strong connections with the domestic music scene. The Dutchman was a close friend of singer/songwriter Georg Danzer who died from cancer in 2007.

”It is hard to express how important he has been, personally and music-wise. I have to confess I do not concern myself with many new bands but it will be hard to fill the gap he left.”

After living in many different countries, Theessink has found his personal idyll in Vienna (“certainly one of the music capitals of the world”).

”I don’t think there is something like an Austrian soul,” he muses. “I think it’s impossible to say something about any people in the world. It might be a cheesy cliché, but it is just true that music brings people together.”

“No one gives a damn about Africa”

Asked about which era of music he enjoys the most, Theessink ponders before answering. “My favourite decades were probably the 1920 and the 1950s. At those times, a lot of interesting music and art was being created. But of course the 1960s were very important too.

”I was 20 in 1968 so I experienced what happened in that year quite consciously. I lived in Berlin when [left-wing student] Benno Ohnesorg was shot in 1967 and there were some movements in the Netherlands as well. Many important ideas were coming out back then, but sadly little was carried over and preserved in a peaceful way.”

Theessink has seen many things come and go but he lives in the present and focuses on the future. “I am not the kind of person who says it was all better in the old days. It just makes no sense to constantly reminisce about the past. You have to move on!”

Theessink, who occasionally holds guitar workshops, can imagine a change in his career somewhere down the line. “If the offer of a sensible TV project with interesting ideas came up, I would certainly consider it - although I really doubt anyone will approach me.”

Does this mean he is fearful of losing his creative edge? “I do sometimes think about the possibility that it can be all gone. I have no idea whether I would accept it, but so far, it has not happened. There is always something that inspires me.”

Most of Theesink’s songs can be interpreted in different ways but on the topic of Africa his music speaks for itself.

‘Thula Mama - Oh Mother Don’t You Weep’, his song from his 2007 album ‘Slow Train’, hits a chord with people when they hear it for the first time. While the melody is one of the sweetest Theessink has ever written, the lyrics are brutally honest.

”We were optimistic, things were looking good - we had a new president […] The poor are getting poorer while our so-called leaders rob our land […] The world is watching as we go down but no one gives a damn.”

”Of course I think a lot about the situation in Africa,” he says. “What saddens me most is that everybody in the world is aware about what is going on there through the media. But to be honest, I don’t know if things will ever get better there.”

His three African background singers give his music a special feel on stage.
”It is very hard for them,” he admits. “They live in Vienna and know they are safe here but of course, they are constantly thinking of their families and friends in Africa who we try to support as much as we can.”

It seems there is nothing which can stop the ‘slow train’ of Hans Theessink and his band. But there are events which cause sudden interruptions of their tour. Theessink and his wife Milica celebrated their Silver Wedding anniversary on Monday, one day after the Lovely Days festival. It meant he had to leave soon after his performance.

”I will be unable to catch Neil Young’s performance tonight”, he sighs with a bittersweet but content expression on his face.