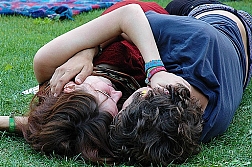 Austria’s music lovers felt being sent back to a nostalgic past last weekend at this year’s Lovely Days festival. The one-day event which took place in the picturesque Burgenland town of Wiesen for the first time featured a fantastic line-up which was headlined by Canadian rock’n’roll veteran Neil Young.

The 62-year-old visited Austria for the second time within a few months to deliver an overwhelming set which included classics such as “Hey Hey, My My” and “Rockin’ in the Free World” long into the night.

But it took the Scottish band The Waterboys to deliver the night’s best performance. Rarely to be seen around these parts, their stirring up-tempo classic rock with elements of traditional Scottish folk music was the most successful bid to entertain the crowd of 5,000. Bright sunshine added up, making it a perfect day out for music boffins of all age groups - our pictures demonstrate.

The Wiesen festival site has a long history. For decades, all kinds of events have taken place there. However organisers suffered a financial crisis a few years ago after they had to cancel several concerts due to bad weather.

But it seems these days the site is again becoming the popular spot it was in the late 1990s when acts like Garbage, Iggy Pop or Marilyn Manson performed in the Burgenland town. The stories of a less than shy Marilyn Manson having breakfast in the local café will hardly be forgotten.

Music fans heading to Wiesen were much better off than the masses looking for a good time at the Frequency in Salzburg country on the same weekend.

Fans at the three-day event at the Salzburgring race track had not only to bear the cancellation of drug addict Pete Doherty’s band Babyshambles - what a surprise it was - but also with cool, stormy weather which sparked more than 1,000 fans being in need of medical attention.

Furthermore, the body of a 39-year-old German was found in his tent by cleaning personnel on Sunday morning. Police confirmed that a combination of the uncomfortable temperatures, together with excessive consummation of alcohol and drugs were the cause for the German’s death. Two rapes were also reported.

While the weather-shattered Frequency festival featured only two headline acts touring in support of a new album (Tricky, R.E.M.), the Lovely Days 350 kilometres further east was a complete contrast.

Apart from The Waterboys and Neil Young, the bill included British hardrock format Wishbone Ash and US folkie Adam Green. Britishrock.cc spoke to renowned Dutch Blues guitarist Hans Theessink about his many collaborations with artists from all over the world, the fear of losing creativity and his friendship with deceased Austrian singer/songwriter Georg Danzer.