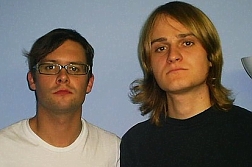 What’s the story behind the cover photograph to your recent record? This kind of picture is influenced by an artist of the sixties… whose name I just can’t remember right now. Well, I think it’s something special because it is such a strong image. I mean, you don’t know what they are talking about – is he about to ask her to marry him?

Do they talk about the laundry? Is the subject they’re discussing a serious one? Does she tell him that she loves him – or wants to leave him? I think it’s a fascinating imaginary. Many fans were confused by it, also because this cover is such a contrast to the one of “A certain trigger”. And I like that because it gets you – you stop and think about it.

Prove me wrong that your trip to China wasn’t just a publicity stunt.

Well, it wasn’t! In fact, it was like a dream come true. It was a holiday for us we were really longing for. We just finished recording our second album, finished a tour as well. So we had some time off and decided to do this – as a present to ourselves and to our crew. It was really interesting and funny as well. The crowds at the concerts we played were like “Oh, that’s weird!” But soon they all were like “Oh, I like that!”

“Sometimes, days just disappoint” – such a wonderful sentence like that, taken from Paul’s online diary; so many gripping, moving lyrics. Would you consider Paul as a singing poet?

It’s hard to say what makes someone a poet. I think Paul’s also not so sure about this. But his lyrics are extraordinary. He is a real artist with words, thinking so hard about which words to use in a certain context. I think his lyrics help to raise people’s conscience about words and their meanings. He uses words in our songs that were never ever used in music – and this is just a wonderful thing. It’s also special to me because his lyrics are so totally honest. To me, they are outstanding compared to all the other stuff that happened at the same time we started – bands like Bloc Party or Franz Ferdinand. Their lyrics mean something? They came from the heart, totally honest? Well, I don’t think so.

Did you get rid of the little book Paul used for certain citations onstage? I missed it the last time I saw you perform [Anm.: Konzertreview, London Special].

Usually Paul just uses it once, when performing “Once, a glimpse”. We still need to include it because people expecting it, waiting for it.

What not to miss when coming to Newcastle ?

Hmm, that’s hard. It’s hard to name just one thing, there are so many great things in Newcastle . It is famous for it’s amazing nightlife. You’ll find a wide range of excellent pubs and clubs there. People are so honest and outgoing. There’s an alternative cinema of friends of ours, called “The stars and the sky”. They’ve built it themselves and it’s a wonderful place. They show a lot of interesting films, sometimes there are discussions taking place.

Which bands or artists from Newcastle you’re proud or maybe even ashamed of?

There are not so many from there, so there’s not much left to be ashamed of. Obviously, I love The Futureheads. They had their first album out when we just started and it was great to see how it was going for them. Of course, their sound was an inspiration for us. I mean, their debut record is a classic! Unfortunately, their second album didn’t get the recognition it deserved. But I think it will take 20 years for people to realise what a masterpiece that record is. It’s just too good to get the praise it deserves.