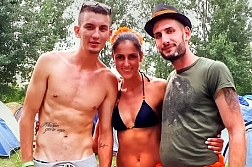 EXIT belongs to that group of festivals which, regardless of their line-ups, never fail to bring you fantastic party and fun time. This edition wasn’t an exception, either. The organizers have fulfilled their intention and really created a magical experience for all visitors. Total of 195 000 people passed through the gates of Exit over four festival days and enjoyed the music and a good time on almost 20 stages.

The biggest crowd was on Sunday, the last day of EXIT, when record for daily visits was broken, with 55,000 people entered the festival area. The main reason for this were The Prodigy, English group who have pointed out on numerous occasions that EXIT is their favorite festival . This was their third appearance in Novi Sad, and once again they managed to make the audience completely crazy . All present were dancing like there’s no tomorrow, while well-known beats of the tracks like “Breathe", "Firestarter " or "Omen " thundered from Main stage. Torches, mosh-pits, positive vibrations and surreal energy dominated the place. No doubt trio from The Prodigy, as well as all visitors will remember this show forever. Before them, Wiz Khalifa owned the stage and succeeded to throw a party with his rap bangers like “Black & Yellow”, “Young Wild and Free” and “We Dem Boyz”, while grime rapper Stormzy also had remarkable set. During the show, he said “Serbia, this is a historical moment, people will look back at this night, and say they witnessed history”! and got uproarious ovations. Among headliners were pop superstar Ellie Goulding and one of the world’s most successful DJ, David Guetta. Their performances were interspersed with familiar MTV hits that got people dancing, mainly the younger generations . First time in Serbia, Ellie Goulding exhilarated her fans with numbers like “Love Me Like You Do”, “Burn” and others , while a great overture before her performance made Bastille, pop-rock quartet whose song “Pompeii” became the ultimate festival anthem. A very quality show was held by English indie rockers The Vaccines . Although the audience response was not satisfying, they didn’t mind it at all and provided a wild and intense performance. They are definitely a band to be heard live. Brilliant George Clinton and his Parliament- Funkadelic further contributed to the Exit magical atmosphere by serving funky groove rhythms from stage along which no one in the audience couldn’t stay still. Those festivalgoers who was never tired of dancing stayed up till dawn and enjoyed sets by Modestep , Wilkinson , Sigma and Gramatik on the established “After 2 a.m.” program. When it comes to the smaller scenes , Fusion stage was host to breathtaking performance by Josipa Lisac , cult Croatian singer , whose jazz-rock improvisation songs entertained people from 17 to 67. Kensington and My Baby, Dutch bands also had a really amazing shows, while popular regional acts such as Urban, Who See, Halka , Borghesia , ZAA and Atheist Rap rocked out in front of mainly local audience . Absolute winners of Fusion stage were two bands from London - punk veterans Cock Sparrer and guys from the group Dub Pistols . Cock Sparrer smashed the jam-packed stage with the setlist consisted of tracks like “Riot Squad”, “Take ‘em All”, “England Belongs to Me” and other hits, while Dub Pistols effortlessly brought a wild party that has delighted everyone in the audience.

Meanwhile, metal and hard rock fans were headbanging on Explosive stage, which saw bands like Raised Fist, At The Gates, Anti-Flag and Paradise Lost, among others. Many visitors come to EXIT solely because this stage and bands award their loyalty with the best way possible, hard and severe performances. Throwing beer glasses, air guitars, mosh and circle pits were usual thing between audience and I think all metalheads had outstanding time.

Party people took their positions at the largest dancefloor in Europe , EXIT’s Dance Arena. Quick beats , visually stunning performances , interesting fashion creations and constant dancing were the main characteristics of the place. Acts like Richie Hawtin , Nicky Romero , Dimitri Vegas & Like Mike, James Zabiela and Solomun concored the stage and the most persistent danced till dawn with Marco Carola. As I said at the beginning , EXIT never fails in its intent and never disappoints those who visit it. EXIT is a festival which is always great to come back. Dates for the next edition are known (6-9 July) and organizers are promising Summer of Love dedicated to the 50th anniversary of the formation of the hippie movement , which changed the world forever. We can agree this is cool reason to come to Novi Sad next year .