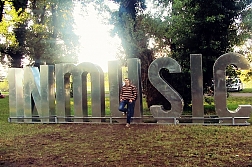 The tenth edition of one of the largest Croatian open-air festival, INmusic, was held in Zagreb, from June 22-24. beside very beautiful Jarun Lake. Mix of different music genres, cheap tickets, popular headliners and very tasty Croatian beer, were the main reasons why INmusic managed to bring the biggest crowd in festival history.

Festivalgoers from all over the Europe came to Croatia and every one of them left Jarun with the big smiling faces, so there is no doubt they will come back for the next edition in 2016.

Sunny weather, vivid atmosphere and Frank Turner with his backing band, The Sleeping Souls, were the great invitation for the first day of this year Inmusic. Their energetic performance brought concert visitors to uncontrollable dancing and Turner introduced himself as an excellent showman. Beside great guitar skills, frontman kept audience attention with constant interaction, and fans cheered him on while he was telling jokes and charmingly winning them over. „I Still Believe” i “Wessex Boy” brought loudest hand-clapping, while „Four Simple Words“ got him down at first row with enchanted diehard fans. After wiggle Englishmen, girls favourite, Paolo Nutini, appeared on Main stage. Show was full of not only funky and groove rhythms which got fans dancing, but also slow and wistful melodies, appropriate for couples to hold each other closer and hug tighter. Setlist mainly consisted of numbers from last year „Caustic Love“ and some older tracks like “Alloway Grove” and “Coming Up Easy”. Concert highlight was playing thrilling, rock-oriented „Jenny Don't Be Hasty“ which prolonged into rollicking and bright version of „New Shoes“. Singer/songwriter from Scotland gained huge ovations from fans after romantic „Last Request“ which concluded his fascinating set. American synth-pop sensation, Future Islands, offered stellar live show on the second-biggest festival stage. Charismatic singer Samuel T. Herring, put out numerous illustrious vocal and dance escapades, such as strong chest punching, thunderous roaring and famous scenic moves while performing their uplifting songs. They played well-known tunes „Long Flight“, „Balance“, „Doves“, „Seasons“ and treat the audience with two new songs „The Chase“ and „Haunted By You“, from their upcoming fifth record. Encore song „Vireo's Eye“ marked the end of the show and powerful grand finale. Future Islands have some sort of special status on this area so there is no surprise why this was one of the greatest concert of the whole INmusic. Headliners of the first day was newly formed Franz Ferdinand and Sparks hybrid, which presented fresh concept and songs from recently published self-titled album. The most part of the audience came to hear good old smashing hits from Glasgow based indie rock band, and since it wasn't a case, most of them left the show feeling disappointed. Best reaction and that arms-in-the-air moment was on „Take Me Out“ and „ Do You Want To“ tracks, and very cold reception of „Things I Won't Get“ or „Police Encounters“ or any other collaboration songs. Personally, i like „Call Girl“ and riotous „Piss Off“, so i was satisfied to hear those and thankful for catching one of the first FFS show outside of Britain.

Second day of the Croatian festival was covered in pouring rain, mud and coldness, like it was November or something. Visitors vestured in raincoats and boots bravely confronted dark clouds and didn't let them to spoil their enthusiasm and gleeful mood. Jessee „The Devil“ Hughes and his Eagles of Death Metal joined audience to fight back the rain together. Frantic leader and heart and soul of the band with (unfortunately absent) Josh Homme absolutely dominated the Main stage. He was using sexual metaphors throughout the whole gig, flirting with girls, complimented the „Best fucking crowd in the world“, and created the most blistering and intense performance which i attended in a while. They played their famous rock'n'roll anthems “Cherry Cola”, “Whorehoppin’ (Shit, Goddamn)”, “Bad Dream Mama”, while the triumphant ending was achieved with „ I Want You So Hard (Boy's Bad News)“ and „Speaking in Tongues“. Home visitors screamed with pleasure when Hughes inform them about another winter meeting in Zagreb, when they should be promoting their future album „Zipper Down“. Alternative rock act Death Cab for Cutie performed after Californian band. Trio recruited Zac Rae, touring member on keyboards and extra guitarist Dave Depper who did a great job and completely used opportunity. Ben Gibbard with his thin nasal voice drove us through his own joys and pains and showed us plenty items of his guitar collection changing those, literally, for every song. DCFC frontman showed us his undeniable talent on piano, passionately playing „What Sarah Said“. New songs like „Black Sun“ or „Little Wanderer“ from this year's „Kintsugi“ sounded perfect, while the most impressive moment was the eight minute rhapsody “I Will Possess Your Heart” when during the one minute long instrumental, Gibbard switched from electric guitar to piano, bringing crystal clear sound and every You gotta spend some time, love was magic and emotional. Final “Transatlanticism” was played last leaving audience ask for more. Totally different temper from that concert was when Elly Jackson, better known for her stage name, La Roux, rocked the World stage. Since the very start of the show until the end, crowd was dancing and shaking their ass off along electro pop melodies which four piece band provided for them. Poppy, lively tracks with stylish and rousing bass lines revived 80's disco party ambience. There were even some guitar solos from androgynous musician which fans received with earsplitting approval. Large amount of applause occured during first chords of the most recognizable numbers „In For the Kill“ and „I Am Not Your Toy“ as well as favorites from recent effort „Trouble in Paradise“ like „Cruel Sexuality“ or jungle beat „Tropical Chancer“. Crowd went into collective madness when „Bulletproof“ arrived and La Roux set up audience in very appropriate mood for the next concert on the Main stage. British dance attraction Rudimental conquered INmusic. Drum and bass act with their eclectic combination of disco, dubstep and reggae permeated with soulful voices turned the muddy space in front of the stage into a real dancefloor. Summer vibe, interesting stage presence and powerful brass section were responsible for creating lively carnival atmosphere. Smashing club bangers „Not Giving In“, „Right Here“, „Free“ got a massive singalongs, and sometimes it looked like all nine musicians and vocalists on the stage were having more fun then audience. Crowd welcomed several new songs from their forthcoming record „We the Generation“, like single „Never Let You Go“ or emotional „Love Ain't Just A Word“ both recieving immense applause. Rudimental closed their more than cool performance with No.1 blast „Feel the Love“ and made euphoric crowd completely forget about Florence and the Machine previously cancelled show.

Frozen festivalgoers from day 2 were overwhelmed with the third night weather change. Again, Zagreb became shiny, colorful light T-shirts replaced raincoats, gloomy and murky clouds were gone and with Islandic band, Of Monsters and Men, things got back where they supposed to be. Simple indie-folk songs wrapped in modern pop sound provide a sense of freedom and happiness and their ellegant and soft lyrics sung by majority of the audience got us into lighthearted feeling. OMAM seemed exuberant and confident as they performed tracks from their two records „“My Head Is an Animal“ and “Beneath The Skin“. Members’ multi-instrumentation is a valuable asset to their theatrical and boisterous performance, so this group should rather be credited as indeed and truly artists. The crowd freaked out when they played their most popular songs „Mountain Sound“ and „Little Talks“ and the chorus “Don’t listen to a word I say/ Your screams all sound the same” echoed even after concert was over. This band is capable of captivating every listener’s attention in a charming and gracious way and simply force you surrender to their inspiring sound. Black Rebel Motorcycle Club delivered avalanche of raw and fuzzy riffs in the course of their 60 minutes long set. Peter Hayes and Robert Been shared vocal duties during the show and they had giant help from the audience which was singing along with them while headbanging and air guitars kept swinging. Two final songs „Spread Your Love“ and „Whatever Happened to My Rock’n’Roll (Punk Song)“ brought the biggest moshing at Inmusic and marked the end of an exciting and agressive concert. The most prominent headliners of this year festival, Placebo, managed to get the biggest Inmusic attendance mostly filled of teenagers and those little older, which wanted to remember that life age when this band was inseparable part of their growing up. Career spanning set offered mighty as ever „Every You Every Me“, witty „Special Needs“ and „Black-Eyed“ flavored with Brian Molko femme-like voice as well as not so great newer tracks like „Million Little Pieces“, „Exit Wounds“ or „B3“ which was failures. Extended climax of the show was when Londoners played cannonade of hits “Meds“, “Song To Say Goodbye“, “Special K“ and “The Bitter End“ which they performed consecutively. During their three-song encore we heard magnificent version of Kate Bush’s „Running Up That Hill“, always diverting „Post Blue“ and menacing „Infra-Red“ for the brilliant rock-fusion closer.

INmusic belong to those kind of easy-going, entertaining and amusing festivals in which having a blast is guaranteed. I believe every single person who visit this marvelous festival will come back with pleasure for the next year, and if there is someone who’s having second toughts, let this report make one decide in favor of the new adventure and everlasting fun.