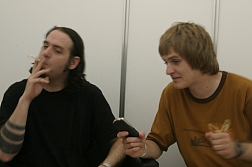 Well, I prefer it to be like that rather than cold. We’ve been on tour in Denmark and Germany the last couple of weeks and it was quite cold and windy.

I don’t know if you’re aware of the fact that your gig next weekend at the Danube Island Festival takes place at the stage of Austria’s biggest radio station. It is a free festival and US5 will be performing before you get on stage. What are your plans?

Well, with information like that… I think we have to cook up something! When we get the opportunity to shock people, we gotta take it! I actually met, I can’t remember his name… The guy in US5 with the crazy hair?

They all got crazy hair.

Well, the guy with the dreadlocks.

Yeah! We met him a couple of times. We couldn’t figure out but I think he’s American. Well, he sounds like an American. He’s a cool guy but it was always kind of “how’re you doin’” and stuff. I think we get him drunk and see what happens.

Who’s to blame for your bad behaviour? Is it the USA, your parents or just coincidence?

Well, just in case my parents read this interview: It’s not my parents, I promise that! Well, we’re five different people from different places. We like different kinds of music but have the same humour. I think people are too serious about everything. It’s nice not to care and have a laugh sometimes. People often laugh when there’s no reason or when they shouldn’t laugh because it’s impolite or whatever – I think there are reasons for that. We never cared about anything. We always said what we thought and made asses out of ourselves. I’d say it works so we’ll continue with it.

Do you think your music would work without all the other stuff – your live show and the videos?

I think it’s an important part of it. For me, a good show isn’t when I play every note perfectly, it’s when I’m up on stage laughing. I often say to myself: how cool is this? I get paid for what I love to do, I’m up on stage, drinking beer and having fun!

Which parts of your live show are planned, what happens spontaneous?

We plan out the basics. There are certain things we always do but there’s also a lot that comes out of nowhere. Last night, Jimmy fucked up “Foxtrot Uniform Charlie Kilo”. He failed to sing along correctly so he made up a text. I only thought: how cool is that?

Do you have a favourite Bloodhound Gang song? Which is maybe the best, which one the worst?

Hmmm… “Fire Water Burn” is probably the best song. When Jimmy played it to me for the first time, I told him that this is the worst sound I’ve ever heard – he doesn’t play guitar very well. But when it all came together, I loved it! I like how all the parts fit together in this one and I always enjoy playing it live. “Farting with a walkman on” is maybe the worst. I love the melody and the guitar solo in it, but it is full of the same verses over and over again. I think we’ll never play it live because the very special Bloodhound Gang thing is missing in that one.

Could you imagine having kind of a regular job?

Well, I never had that one but that day will come soon and I’ll have to figure that out.

You’re good friends with Bam Margera and all the other guys from his TV show and “Jackass”. How do they behave when there’s no camera with a red light near them?

The first time I met Bam he was maybe the nicest guy I’ve ever seen. He reached out his hand and said: Hi, I’m Bam! I said to him: I know who you are! Of course you’re Bam, I’ve seen you on MTV before. He’s a cool guy. I also went out drinking with them a several times when they start slapping each other just because they think it’s funny.

Did he change over the years? In the beginning, he was one of the youngest and now he has his own TV show?

The only thing that changed is that he’s rich. But he lives his life the same way he always did, he doesn’t care about anything.