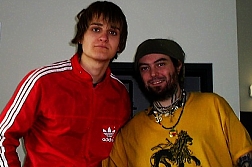 Was there anything for you to consider before joining Soulfly?

No, I absolutely wanted it. The only thing I was doing at that time was working on my solo project. I had plans to start my own band and out of the blue I got a call from Max. I didn’t expect to get a phone call from some other band, especially one I respect and I grew up listening to.

What does it mean to you now to be part of Soulfly?

It’s kind of a trip. You know, I grew up listening to Sepultura and Soulfly. I knew all the songs and I always was a big fan of Max. Recording the new stuff was amazing. (Anm.: Max Cavalera betritt den Raum) We’re just talking about you, man!

Recently you performed several times in the UK and in Germany. Did you notice any differences concerning reactions of audiences? Is there something like that in general, for example South America compared with Europe?

Well, I’ve never been to South America yet, but the whole tour has been unbelievable. I absolutely could see the crowd’s reaction to the new record everywhere. All the fans go crazy for “Dark Ages”, they know all the words of every song and all the shows were sold out. We were kind of upgraded from the last time we’ve been to Europe for “Prophecy”. Now we play in bigger locations than ever before. We’ve also been to Ireland! So, this has been the craziest tour I’ve ever done because the response to the new record has been unbelievable.

What is it like to be in a band with Max Cavalera? Is he the kind of mastermind everybody expects him to be?

It means a lot for me because I grew up with his music and now I sit down with him asking me if I have any new songs or ideas. To me it really means the world because how many people can say that they joined one of their favourite bands?

How much are you involved in the process of songwriting?

Well, Max writes all his lyrics on his own but is totally open for ideas. When it comes to music there’s a lot of collaborating going on.

"I'm obsessed of guitars. I don't play just one style of music."

Your new record is called “Dark Ages”. Would you say that our century is kind of a dark age?

I think there were some darker times; World War One and World War Two, obviously. For our generation, with everything going on, it is kind of a dark age at the moment, but it could be worse.

Soulfly is also known as a very political band. Do you think that concerning the contemporary situation in this world everything is said and done so far?

I think people should clean up their own lives before they start judging other people. In my opinion, music should be entertainment. It shouldn’t be too political because music is something you do because you enjoy it. People come to concerts to have a good time and not to be politically educated. I don’t think that there are any bands out there that are that intelligent to be preaching too much about politics. At the end of the day, it’s all about the music. When I go to see a concert, I want to have a good time for two hours. As a person in a band it is my responsibility to do my money’s worth and put on a good show. Everybody that comes to see our show should feel welcome, no matter what you’re into, where you come from or what you look like.

What do you think about critics that claim that the music of Soulfly has become more monotonous, the lyrics more hateful?

Well, this is a dark age. But Max’ lyrics aren’t hateful at all, I think they are positive and spiritual on a certain level. I think there are many other bands that present a much more hateful vibe at their shows. And the cool thing with Soulfly is that everybody is welcome to come. You can be from any country, with any colour or religion, as long as you‘re a good person and do not act like a jerk and hurt people at our concerts.

Can life on the road be hard sometimes or is it the best thing you can imagine?

For me it’s the best time because it means to practise all day long, that’s what we should do as musicians. You have the whole day to do that to play the best of your capability on stage. I know that a lot of people don’t look at it that way, but I grew up working day jobs. The minute I wake up I got a guitar in my hands, the minute a go to sleep too. But of course it can be tough from time to time because everybody misses family, friends and girlfriend.

Would you compare your passion for guitars with kids in Brazil and football? It is said that they are able to kick the ball before they start to walk.

Yeah, but I would say that I’m even more intense than that. I’m obsessed of guitars. I don’t play just one style of music. I love flamenco and put a lot of time into that.

Are there any technical skills on the guitar you are still working on?

Yeah, I’m completely into flamenco at the moment, it’s a huge challenge. I do a lot of it on my solo record and there are some elements on Soulfly records too, but I have a long way to go before I can call myself a flamenco guitar player. There are so many different styles, it definitely takes years. It’s not like rock where you pick it up and you’re a rock guitar player.

Max is known as a football fanatic. Are you interested in it too?

Soccer is cool but I rather play it than watch it. I’m more into boxing. I like to play sports rather than watch them generally.

You grew up in New Jersey and still live there. How can we imagine growing up there?

Where I grew up, it’s great. I mean ten minutes away from New York City and only 45 minutes away from the New Jersey shore, a lot of forests and mountains. So, everything is right there. I grew up going to hardcore shows in New York and New Jersey. I was able to see many great underground bands a lot of people in the rest of the country never got to see. These bands weren’t even touring, they were kind of local ones. So, the scene there is one of my favourite music scenes I got to know so far.

"Metal is my favourite, but I can’t think of any type of music I don’t like."

(laughs) No, I never met him there although he’s from Jersey too.

What do you know about Austria in general or concerning music?

I’m not familiar with any bands from here. I know more about historical things of Austria that maybe you guys aren’t too proud of, World War Two for example. But we always got great shows here. I think that Austria is a metal country.

Soulfly always did a lot of collaborations. What can we expect for the upcoming records?

Well, I don’t know. Something like that just happens. Most of the time Max runs into someone he likes and then they do music, that’s it.

Is there any kind of mainstream music you like and we wouldn’t expect you to?

I listen to a lot of guitar music. Metal is my favourite, but I can’t think of any type of music I don’t like. I think there are many great pop bands. As you mentioned Bon Jovi before. I mean, I respect them, the guys are doing it for a long time. Whether you like his music or not, he’s a great singer and songwriter, but I don’t listen to mainstream radio or watch MTV. At the moment I listen to Raunchy, a band from Denmark we toured with. I really like to check out our opening bands. I’m really interested in what’s coming up.

What do you think about the Rolling Stones concert recently at the Copa Cabana in Rio de Janeiro?

I heard about it, I think it’s cool. The Rolling Stones are awesome, I like a lot of old Stones stuff. I’ve got so much respect for a band like that. They are doing it for such a long time and they’re still out there putting records out. Forty years after they came out and that’s pretty unbelievable. I’m sure it was a great concert.